After his successful solo recordings “A l’Espagnol” and “Royal”, Stefan Koim released “Passacaglia della vita” in 2021 as part of the ensemble Cembaless.

As part of the ensemble Cembaless, Stefan Koim was accepted into the European Union’s advanced training program, EEEMERGING+.

Since October 2019, Stefan Koim leads the Plucked Instruments Department at the Institute for Musicology and Music Education (IMM) at the University of Osnabrück.

“Stefan Koim is an extremely refined, interesting and versatile guitarist. His beautiful “sound” on the guitar always serves noble musical ideas. Stefan Koim is always evolving (the best thing that could ever be said about a musician!). He is always looking for bold, unusual, new projects from all eras, covering Early music to the most bizarre works of the present. I wish this excellent young guitarist the greatest success he so richly deserves.”

Stefan Koim, born 1986 in Hamm/Westphalia, studied classical guitar and historical instruments in Cologne, Salzburg, Boston and Würzburg with Hubert Käppel, Eliot Fisk, Jürgen Ruck and Thomas Boysen. In 2017 he completed his Master Class Dimploma (Meisterklassendiplom) with distinction. His musical education is rounded off by academies, such as the Accademia Musicale Chigiana Siena and Fondazione Giorgio Cini ,in addition to regular master classes with renowned musicians such as Konrad Junghänel, Jakob Lindberg, Han-An Liu, Carlo Marchione, Roberto Aussel, Pavel Steidl, Manuel Barrueco and Oscar Ghiglia. Stefan Koim has won several national and international prizes as a soloist. With his Early music Ensemble Cembaless, he won both the 3rd Prize and the Audience Prize of the Biagio Marini Competition in Neuburg an der Donau in 2015, followed in 2016 by the Audience Prize of the „ZAMUS Spielwiese“ and in 2017 by the Audienc Prize and Grant at the Saarland Radio and the Academy of Early Music in Saarland. This year, Cembaless was accepted into the advanced education program Eeemerging+, supported by the Creative Europe Programme of the European Union. Stefan Koim is constantly searching for new repertoire and experiments with new concert formats. Due to his versatility, Stefan Koim is in demand for world premieres, film music and opera performances. Concert tours have taken him to Russia, Italy, Switzerland, Austria, Denmark and the USA. In 2013, he opened the renowned BostonGuitarFest with a world premiere. Further highlights were concerts in the Paulskirche Frankfurt, the Philharmonie Essen, the Cologne Opera, the TivoliVredenburg Utrecht, the Jordan Hall Boston, the Händelhaus Halle, the Wiener Saal Salzburg, the Glasunov Hall of the Rimskij-Korsakov Conservatory in St. Petersburg, the Gnesin Music Academy Moscow and at Harvard University in Cambridge. Stefan Koim has been supported by the Rotary Foundation, the Fulbright Commission, the Werner Richard – Dr. Carl Dörken Stiftung, the Konrad Adenauer Stiftung and the Studienstiftung des deutschen Volkes, among others. CD releases at musicaphon and Naxos were highly praised by the press. He is currently head of the guitar department at the Institute for Musicology and Music Education at the University of Osnabrück.

Cembaless lives up to its name by excelling in its rare choice of instrumentation for early music by omitting the cembalo. The ensemble is innovative, passionate and sensitive in its arrangements, always finding new ways to design their concerts, both aurally and spatially. Cembaless invites their audience into its own soundscape, bringing together fiery, thrilling and lively rhythms with intimate feelings.

Their success is proof of the magical moments they create on stage; for example, they have been awarded the Audience Prize at the Biagio-Marini-Competition 2015, the Audience Prize at ZAMUS-Spielweise 2016 and the Audience Prize and Grant at the Saarland Radio and the Academy of Early Music in Saarland 2017. In 2020, the ensemble will be accepted to the advanced training program Eeemerging+ (Emerging European Ensembles), which is supported by the Creative Europe Program of the European Union.

The Daidalos Guitar Duo has taken on both the challenge of creating something new and illuminating the traditional in new contexts. The musicians combine their critically acclaimed virtuosity and musicality with expertise in historical performance practice and contemporary music, and translate this into innovative concert programs at the crossroads between early and contemporary music. This unique combination inspires numerous composers and musicians to collaborate with the duo.

Raphael Ophaus and Stefan Koim have been making music together since they were young. They have been awarded some of the most prestigious scholarships and international prizes, and have supplemented their guitar skills with studies in early music and musicology. This is a unique duo whose extraordinary success is reflected in their collaborations with eminent composers such as Helmut Lachenmann and guest appearances at international festivals such as the Darmstadt Summer Courses. 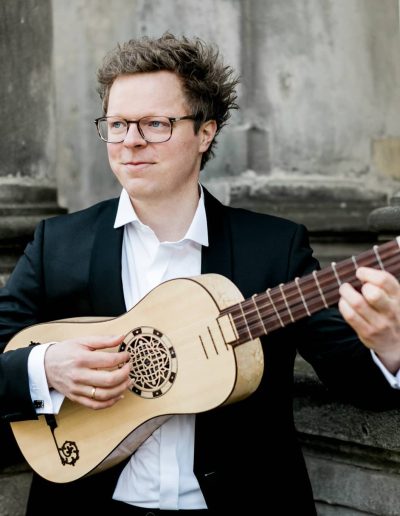 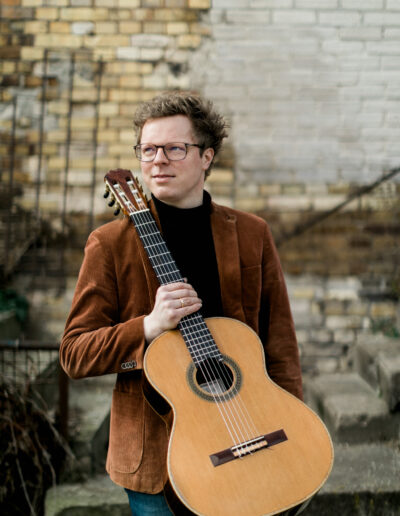 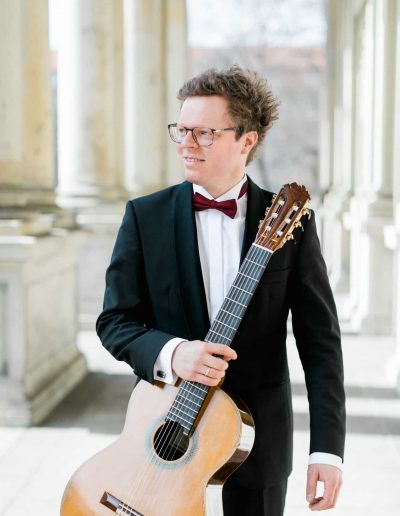 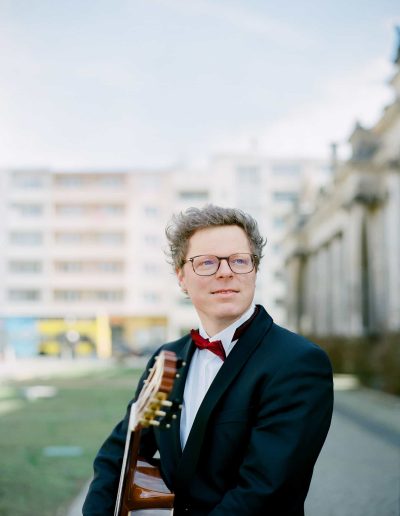 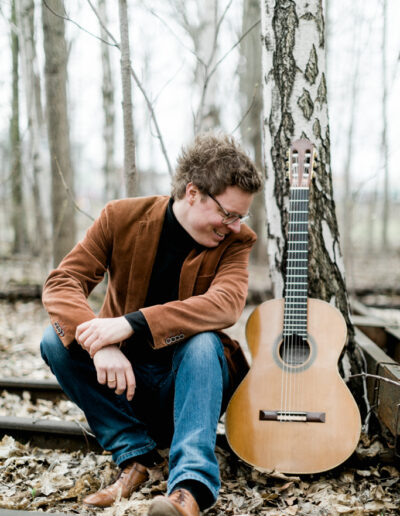 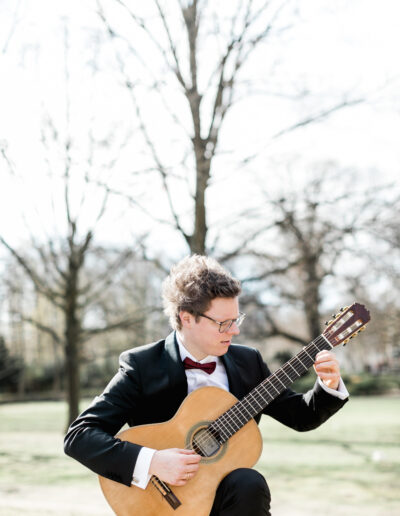 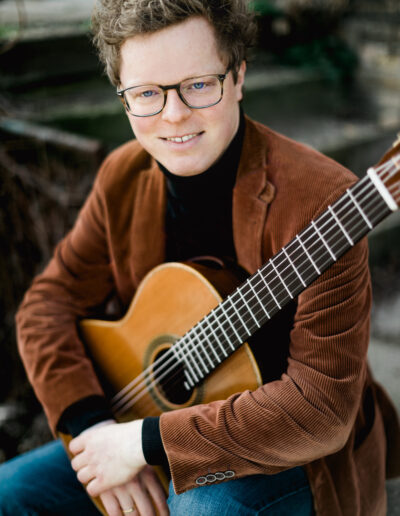 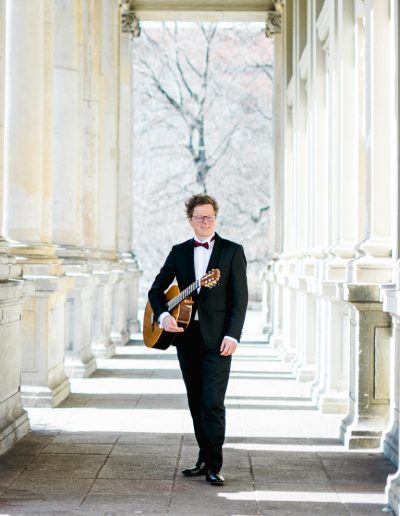 “ROYAL…, noble sound in courtly context,” this, in a few short words, is how one could describe the music of the most famous Renaissance lutenist John Dowland, which is the main focus of this CD by Stefan Koim. On one hand, compositions by Dowland are presented which represent an impressive fusion of heart, spirit and intellect from the quill of a cosmopolitan musician of the sixteenth century. On the other hand, there are two important modern compositions by Benjamin Britten and Hans Werner Henze, who refer to Dowland and the lute music of the Elizabethan era in their works. This is explicit in Britten’s Nocturnal, a variation work on John Dowland’s Air Come Heavy Sleepe, whose original form untypically appears only at the very end of the composition. The reference is rather implicit for Hans Werner Henze’s cycle of Royal Winter Music written in London. He was inspired by the works of the English poet, playwright and Dowland-contemporary, William Shakespeare. It is therefore inconceivable that he did not have Dowland’s lute music in his ear while composing his work for solo guitar. Therefore, the compositions compiled on this CD are intended above all to call attention to two things: the still fascinating sound of an era that is frequently called the “Golden Age” of English history and the still inspiring potential, after 400 years, of this music for that of the modern age.

„When music of such stature is played this masterfully, there’s no need to explain. All the miniscule details in this landmark piece are beautifully brought out, and the climactic section before the theme finally makes an appearance has more tension and drama than usual[….] Koim’s performances are dramatic, technically faultless, and gripping throughout.“

On his debut CD “À l’Espagnol,” Stefan Koim presents works from the Baroque era to modern times. The unifying elements of this musical journey through the guitar repertoire are the origins, influences, and traditions of Spanish music. In the case of the Chaconne from Johann Sebastian Bach’s Second Partita for Violin, BWV 1004, the relationship to Spain is to be understood in terms of form: the chaconne was originally a folk dance, already verifiable in Spain around 1600. Elements of folk music are important aspects of the music written by the Spanish composers Fernando Sor, Manuel de Falla and Joaquín Rodrigo. Moreover, the French composer Tristan Murail utilized performance practices from Flamenco in his work Tellur to achieve his imagined sounds. It’s remarkable that the reception of Spanish elements took place either via France or in direct altercation with influences of French music resp. music by French composers: e.g. Bach used a French model as the basis for his composition the Ciaccona, Sor stayed in Paris, the center of French musical life during his most productive years regarding guitar music. De Falla dedicated his work to the French composer Claude Debussy, whom he very much admired and Rodrigo, as well as Murail, developed their personal styles in altercation with actual tendencies in French musical life. These composers used a mix of Spanish and French elements, creating a distinct connection among the different musical styles in Europe which overlooked national borders.

–  an homage to the facets of life: heartache, betrayal, seduction, impermanence, excitement, fun and laughter.

Cembaless plays boldly, joyfully and passionately a hymn to life, expressing emotions ranging between the extreme polarities that human life offers. With its exciting arrangements and grooves the ensemble seeks to create spirited interpretations of early music that beat the pulse of the times!

In “Passacaglia della vita”, the persistently repeating bass melodies, or ostinati, represent the circle of life and all of its diverse emotions.  These ostinati form the basis on which the different languages and melodies as well as musical styles come into contact.

Cembaless’ arrangements offer a new interpretation of songs from the 17th century to early music enthusiasts und young ears. “To us, it is especially important to make music the way we do – free from dusty music structures and very much in the spirit of our own, modern interpretation.” So can the addition of the Persian drum be seen, perfectly merging together hip-hop beats with the early music. 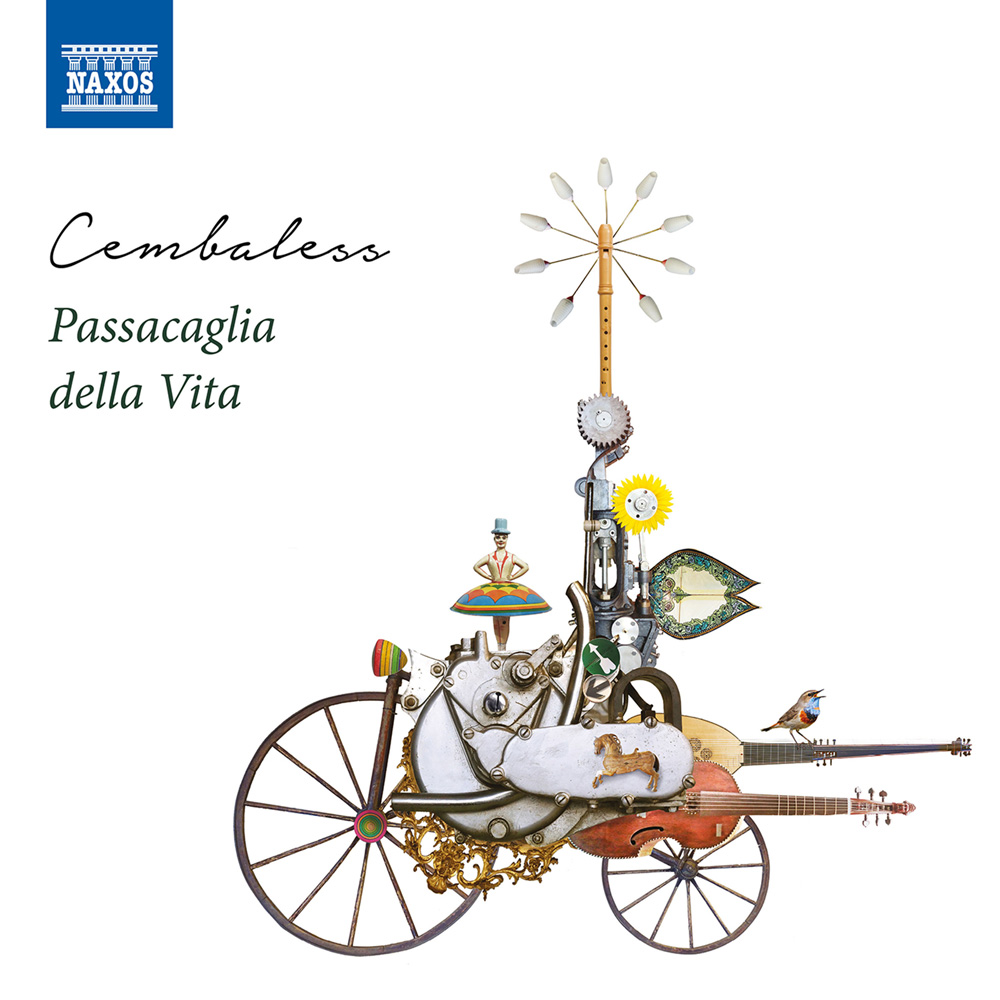 For all inquiries about the Album “Royal,” please contact: